Kaselehlia ifagalz valued followers and Ran Annim pwipwis and friends. Mogethin fellow Yapese and Lotu Wo, Lwen Wo, Ekwe Wo, or Fong Wo  to our Kosrean friends and fams. Alii and Ak Mesisiich. E kau a ua ngarang, Palauan fams and friends? Hafa Adai and Aloha to everyone on Guam and Hawaii. And last but not the least, hello to all in the Americas.

...if it's not for you, do it for your family and friends

Before telling you my story, I need to show you what the experts say cancer is. This is what my doctor said, “Cancer is a group of diseases that develop when cells in a part of the body begin to grow and spread out of control.” I think it’s also important to know the difference between tumor and cancer. And I found the answer on webmd.com. Here’s what they say, “A tumor is an abnormal growth of cells that serves no purpose. A benign tumor is not a malignant tumor, which is cancer. It does not invade nearby tissue or spread to other parts of the body the way cancer can.”

It was about 4 years ago when I noticed a lump on the outer left of my thigh. I didn’t care much about it, but it was there. No pain or anything. It just showed up and stayed there. It’s annoying for sure but nothing much more to it.

Maybe not many of you know, but I am a Uber driver. I spent up to 12 hours sitting in a 2016 Maroon Fully Loaded 2XLTZ Impala, literally moving Americans, one person at a time. To this date, I have been in this business for about 4 years.

The reason I brought up my driving for Uber is because when I found this lump on my thigh, I thought it was from aggravating it with the side of the seat I was sitting on. The rubbing against the left section of the seat, the part shown in the white circles in the picture,may play the aggravation part. It maybe. Who knows.

But one thing clear to me, was it started from the outside of my left thigh where it rested against the side of the seat.

I came up with a different idea and put a cushion on the seat to lift me up so my thigh can rest on top and not against the seat.

I guess a heavy man, with 257 lbs of beer belly and lots of tuna meat and sea salt can sink into the seat just like that. Hahahaha.

But this was and is still my suspicion of how all this mess started. It wasn’t until I started driving and sat in the car for a very long time that the lump showed up and it began on the outside of my left thigh.

Sometimes it felt numb and at times felt itchy, I guess from it growing inside the skin of my thigh, just under the fatty tissues. I thought it could just go away so I left it there and never bothered with it.

...never laughed so hard in my life

This is the best part of this terrible story of mine. I got to laugh so hard, it felt great. At that moment, in that very space, I was laughing out loud at what I was seeing without even a second to think of what was yet to come. It was just a very funny scene.

It was early in the morning, getting ready again for another day of Ubering. Got out of the shower and as I was drying myself I saw that the lump had moved from the side to the top of my left thigh and the look of it was just like I was looking at a chicken

leg. It was so funny that I had to run out of the bathroom and wake up my Yobo to show her what an amazing look it was. Hehehe.

I went downstairs and into the kitchen to show it to my girls. I was like, this thing literally moved from the left side of my thigh and moved over the top. I guess it has no room to grow out on the side. lol

I saw the concerned look my girls had but to me it was just a funny thing happening to me. I really didn’t think much of anything.

Well, I guess because it was painless! There’s really no pain whatsoever associated with this now humongous lump on my thigh. It’s just the itchiness which makes sense because the skin is stretching to accommodate the massive whatever growing under it.

My grandson thought it was a football hidden under the skin. I still don’t know what to think of it. It’s been growing for about 4 years now. 4 years according to the specialist is too short of a time and was concerning.

the first visit & into space

...it's a sarcoma and it can stay with you till you die

Yobo and them kids bugged me to a point of giving in that I found myself sitting and waiting in the family doctor’s office a couple miles from home. When they finally called me in to see the doctor, he told me it’s sarcoma. What the hell is sarcoma? This is what I found on webmd.com, “A sarcoma is a rare kind of cancer that grows in connective tissue — cells that connect or support other kinds of tissue in your body.”

My family doctor told me it’s a tumor, most likely a benign tumor that can stay with me for the rest of my life. He told me to monitor it very closely and if I noticed it’s growing rapidly then I need to check back with him. In the meantime, he’s going to refer me to the general surgery department so they can take a look at it.

Went in and they ordered MRI of my thigh. The Radiology department stuck me into this scary looking, outer space craft thing that magnetically takes photos of tissues inside my thigh. It was a weird 30 or so minutes of just lying there listening to country music and hearing this pop pop pop gruhhhhh gruhhh thing going on and wondering if I am flying between pluto and mars or venus and mercury. Or they’re trying to see if one of those planets magically disappeared into my thigh and just hid there under my skin. lol

A week later, this popped up into my chart, “Impression: Large intermuscular mass anterolaterally in the left thigh with fatty components and more solid components with irregular enhancement. The pattern suggest liposarcoma.” The surgeon called me a day later and told me he’s referring me to the Seattle Cancer Care Alliance to see a specialist. This is when my worry started to creep in.

If it’s up to me, I would not have put CANCER in the name of that facility. It scared the crap out of me knowing cancer sucks. It kills a lot of people.

...in my next blog, I will talk about my experience at the Seattle Cancer Care Alliance and the plan for treatment. Wishing you and yours a healthy and prosperous journey.

...more articles for your reading pleasure 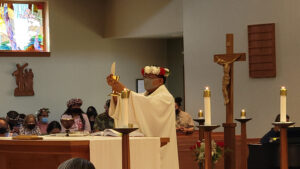 It brought back memories of when I was still on Guam and felt very much connected with these communities. I am sure everyone of us in that crowd felt the same way. And why not, we are all sons and daughters of God.

A day full of Activities and lots of FUN

It was a day of fun. Kids and adults came together for some good time and tons of activities. Nephew SK’s band, the MESSENGERS, provided live music entertainment. It was a huge success. 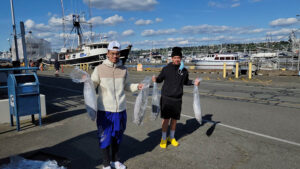 OUR FIJIAN BROTHERS NEED YOUR HELP

At the dock in Seattle, Washington.

Was sleeping and Chaz texted and woke me up! Chaz, see what you did? On a peaceful sunday? Hahaha. Not really. I was just surfing all morning long. Chaz was inquiring about the location of St. Jude and he found it. I am sure he got himself tuna and enjoyed a bowl of sashimi under that beautiful afternoon sun. 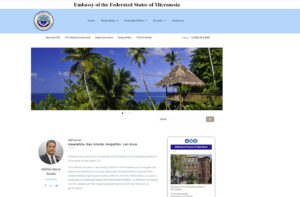 CONGRATULATIONS to His Excellency, Ambassador Akillino Susaia, DCM Jackson Soram and their wonderful team at the FSM EMBASSY DC office on the LAUNCHING of their new website, fsmembassy.fm. Please take some time to visit their website and learn the features that they have. 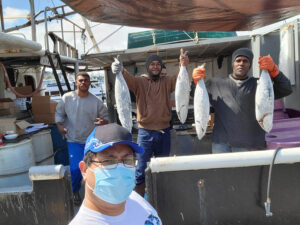 The Fijians brothers are here in Seattle and they brought lots of TUNA!

Tuna from the South Pasifik. Yes. They brought tuna from the South Pasifik. And many people might have been scared away thinking of that very very long line last year, so it is a perfect chance for you and your whole clan, whole village, whole island to walk straight up to the ship and get tuna of all sizes. The best thing is, it’s still that same cheap price of $3.50 per pound.

Pasifika Peoples this BUD for you! – Get Vaccinated Today

Dear Pasifika peoples, these kids are ready to help you sign up and get the COVID19 vaccines. Let’s do this to protect ourselves and each other.