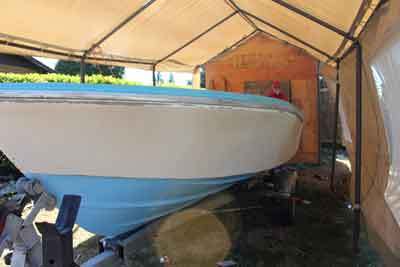 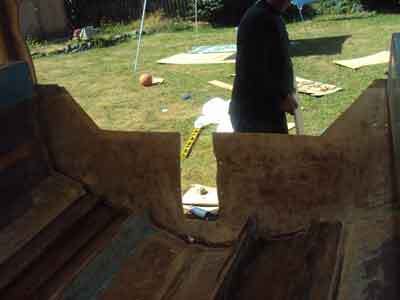 Have you made up your mind yet on what kind of boat you are going to buy? Have you own one yet? Do you have the money for it? These are a few of the many questions came to mind while contemplating buying one.

It is not cheap to get a boat here. At least that much is very crystal clear. The one I was looking at and wishing my heart out that I get, was a Trophy 20 footer with diesel and a range of 400 miles. But the cost is well above my pay grade… Too much for an islander like myself.

On a sunny afternoon as I was driving around town, I came upon a boat that was up for sale. Price tag? $600 bucks!Â  And it came with a Trailer. I stopped in right away and inquired about it. The poor dude told me he was selling it for 600 bucks since he was moving. I slowly took out my wallet and saw that I only had 200 in there. I told the guy that I had 200 cash and that I was going to call my wife to see if she can agree that I buy this thingy. As soon as I got off the phone, IÂ  told the poor dude that it was not my lucky day since my wife turned down my request that I borrow money from her. As I was making my move toward my vehicle, the dude stopped me and told me that he can sell it to me for 200 bucks. I was so happy, I almost kiss the man! lol. No. Not at all. I was just happy.

I bought the boat and head straight for Autozone to buy something so I can hook it up to my truck and tow it to my house. In no time, the boat was in the front of the house. But there is a huge problem, I have no way of getting it to the backyard.

Time toÂ  cut out a whole part of the wooden fence! That was exactly what I did, cut out about 10 feet of the fence and pushed the boat right through there. Now the hard part of tearing that thing apart.

First thing first, cutting and tearing everything off the boat until I reached the shell of the boat itself. As you can see in the picture on the left, I took out everything including the inboard engine down to the bare minimum, the plastic shell itself. Lots of work and lots of trash too.

One thing keeps me going though, the idea that I will see it through until the finishing touches and see if I can really do such a thing.

If there is anything I regret about this project, it’s that I had no plan for it. I was working out of the total blue. I should have at least came up with some blue print as to where I needed the project to be when all said and done. But then it was the very first thing I ever did and is a learning project.

The Transom was rotten to the core. It took meÂ  a while taking the old one out, using all sorts of tools and techniques. I actually celebrated the time I got that damn thing out. You can see my face with dust in the picture on the left as I was trying to put the new Transom I created in its place. What a job! It wasÂ  a relief that I finally got this thing in as I was very sure then that this projectÂ was sure on its way somewhere.

The challenge that I got workingÂ on this boat was that it was an inboard so it has a hole in the plastic that needed to be blocked up. I know putting the new Transom in will cover the hole, but then what I do. I came up with a plan of adding two 2×4’s, one on the outside and one in the inside and use long steel screws or whatever they call those to pull the plastic wall toward the New Transom. In addition, I added three layers of fiberglass cloth between the transom and the wall and just simply spill resin in between while tightening the screws on the 2×4’s. After that, I filled in the hole with more cloth and finally fillers.

Installing the new floor was the easiest part I think. All you have to do is to cut out the plywood to match the boat flooring layout, cover it with fiber cloth and resin on both sides and then attach it to the boat. Simple and easy. Fairly straight forward. Oh, do not forget to add foams in there too. I added the foams after laying the entire floor out. I just bought the spray ones from Home Depot and sprayed it into an open I created in the floor. It was fun! lol. Do not forget to wear gloves or you will have foams all over your hands.

Alright folks, the next Article will be about the other side of the project! When it’s nearing completion. 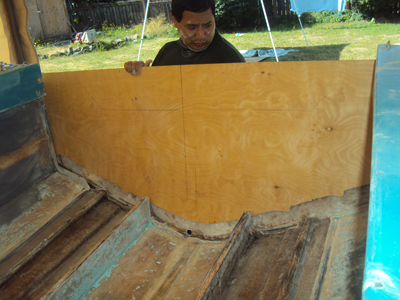 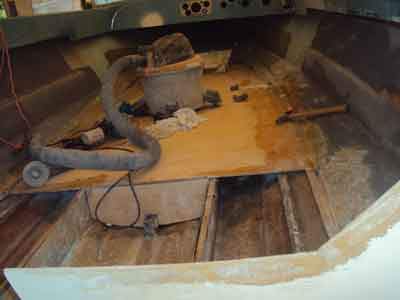