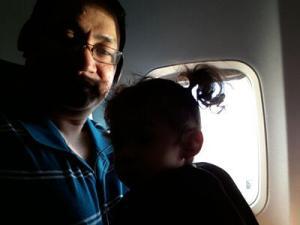 The flight was so early and so late that I didn’t have a chance to get some peppermint mocha from star bucks in Seattle.  It was just too early in the morning and I woke up so late, not to mention a stop in to get gas. It was hustling all the way through the last leg.

The advice was to get to the airport no later than two hours but as an Ifalikese it’s obvious that I just have to do the opposite. Arrived like 45 minutes before my flight, I ran like crazy to get to the gate, blaming the poor United workers in the process for getting in my way and slowing my pace. I flew by the helpers at the Check in Points, thinking I know better, realizing how stupid that thinking was later when a guard told me I was in the wrong line and that I had to go to the 4th line down. It was a mad dash to get on the plane.

I ran like crazy to the 4th line down only to meet another guard that cut me off my track and put me through a human traffic control line that looked like a Halloween corn maze. The minute you think you are close to the check point is the minute you find the line going a different direction. It felt like the line was going infinite.

I made it to the gate and on to the plane thinking I was going to be the last one to get on, but thankfully there were others dashing down the aisle. The seating was so smooth and I found that I had more leg room on this flight than most flight I took before. I hurriedly took some photos, send some texts and say hello to fb before the captain announced the push out and the usual, TURN OFF ALL ELECTRONICS, noise. This is the worst part of any flight-to shut off your bff of all things. I was really sad but there really nothing much I can do. I sneaked out my Canon LS cam but the flight attendant saw me and kindly told me it has to be shut off too. I just smiled knowing the minute I raised my voice is the minute they drag me off the plane.

We took off sailing slowly into the universe where I silently told myself it’s time for daydreaming. The first dream that appeared into my mine was wishing there is such a craft that can take you to places in seconds. I am sure aliens have discovered a way. We are not there yet.

Seattle slowly disappeared into the abyss, California appearing at our and coming in fast. I was on the headphone listening to our captain lady conducting her routine of checking into the controllers, “United 294 heading due west at whatever the number,” lol, then the controller would threw out numbers that I can’t comprehend with my tiny little brain. It was obvious I wasn’t driving this plane.

The landing was smooth with San Fran smiling at us with a perfect day! It was so beautiful out.

As I am tapping on this laptop, I am listening in to these guys on channel 9, seems like we are over Albuquerque, New Mexico. I heard our captain calling our flight out to the controller in New Mexico. The guy didn’t hear it right so he was confirming the call, did you say United 294 where our captain replied affirmative, United 294. The ride is kind of rocky right now so I gotta shot this thing off.