Ran Annim and many kapongs to the valued followers of my blogs. I cannot be more impressed with the reactions to my very first blog on the great state of Chuuk on Why Chuukese are hated on Guam and Hawaii. Many thanks and Kinisou Japur to everyone that commented and shared their point of views. The reason I am blogging about this is so we can keep reminding ourselves that there are a lot of work to do to combat this negative percetpion. Most Chuukese are well liked people, I do not want us to loose sight of that, but that doesn’t take away the fact that this perception is out there.

The last blog I wrote talked mostly of things that Chuukese have control over, but there are things that we have no control over them. Resources is a big thing. When Chamorros or Hawaiians find themselves sharing resources with people from other places, they of course would have bad feelings about it. Let’s take jobs for example, if Chuukese are taking jobs away from Chamorros or Hawaiian, they wouldn’t like that. But we must have those jobs to survive on their lands. Same with everything else.

The contentious issues involving our Chuukese are housing and Food Stamp. Many Chamorros and Hawaiian thought of us like Romney thought of 47% of Americans like he said, “All right, there are 47 percent who are with him, who are dependent upon government, who believe that they are victims, who believe the government has a responsibility to care for them, who believe that they are entitled to health care, to food, to housing, to you-name-it — that that’s an entitlement. And the government should give it to them.” The reason most Americans were mad or as they say it on American medias, the reason there was a huge backlash to this comment is because most of that 47% work their entire lifetime.

A friend, a Chuukese, once told me that some of her people use the Chuukese word, TINIKEN to include the ability to find and take advantage of all the benefits the government provides, i.e, housing, food andÂ healthcare. She went on to tell me that some even brag about having all these benefits because in a sense they are TINIKEN because they were able to find and take advantage of these assitance.Â She added that she wished that somehowÂ her people realized what they are doing to themselves and their kids because this view is totally against the view of the US late president, John F. Kennedy when he said, “ask not what your country can do for you – ask what you can do for your country.” I smiled and told her that I pay too much taxes into these benefits so I amÂ all for it, liking the fact that ourÂ Micronesians, not just Chuukese, use these programs to their benefits. She turned and told me she’s not against the fact that we use them, she’s against when we dependent on them because we’re spoiling ourselves and our kids. And then she laughed out loud and said, “this is one of the many reasons Chuukese are hated on Guam and Hawaii because people think of them as LEECHERS, one who benefits, usually deliberately from other’s efforts but does not offer anything in return-WIKIPEDIA.

At the Oregon State University, one of the subjects I worked on as a student of Anthropology was to find ways to combat the stigmatization of Foodstamp because many students were eligible for it and need it but won’t take advantage of it because as many Americans believe, it’s for the poor. They do not want to be looked at in that light. It is the very opposite of what my Chuukese Lady friend talked to me about in terms of the TINIKEN thinking. At that time, I hadn’t met anyone of our islanders to talk to them about this kind of issue. I wish I had so I can pursue it to see if there is anything I can learn from that perspective and use it to lure more of my fellow OSU students to participate in it while in school.

This is a very conflicting issue for me because I believe Chuukese as well as anyone from Micronesia should take advantageÂ of these programs. I guess the issue is DEPENDENCY on these programs because that can impact your progress in terms of getting ahead in your career. Some of us are dependent so much on these programs that we simply give up on looking for a better job or better opportunity. And even our kids are not looking ahead as they thought living on these programs is the better choice.

Educating ourselves and our kids is one of the many ways to combat the negative views Chamorros and Hawaiians have of us. We must tell ouselves that TINIKEN doesn’t include DEPENDENCY on others but rather hard working so that you can share what you have with others. Food Stamps, Section 8, and other Federal programs are temporary fixes to help usÂ transitioning ourselves intoÂ becomingÂ Independent and live off the fruit of our own labor and in return paying into the tax system to help others to do the same. They are there for us to use as we better ourselves or positionioning ourselves into becoming contributors to society which can then show the Chamorros and Hawaiians that we are not going to take away their Food Stamps and Section 8’s, we are contributors to them. We are not LEECHERS but productive members of society!

One thing I do not want to do is to discourage you from using these programs. These are awesome programs for the purpose of getting you ahead in life. Please take advantage of them, just do not become dependent on them! There is a huge difference. If enough of us Chuukese, or Micronesians for that matter, get off these programs, I am sure the negative perception of us as LEECHERS and BURDEN on society will dissipate and in due time disappear.

So let’s begin today by educating ourselves and our kids. Let’s use these programs to move us ahead, not to settle down and live off them. We can do better. Until next time, kinisou japur.

Are we Yapese afraid of ETG or China? Do we have to?

Team Falan and Salalu – Candidates for Governor and Lt. Governor 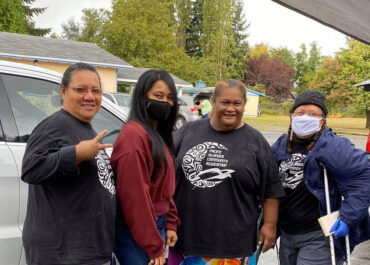